Propagated Acropora
Sustainable coral breeding to protect the natural reefs. CommunityCorals – The online marketplace for offspring corals.
Acropora frags in the online shop at a fair price – CommunityCorals Online
Acropora is the most species-rich genus of hard corals, the acropores are often called antler corals or table corals, depending on the growth habit. Like most other hard corals, they live in a symbiotic relationship with small algae (zooxanthellae) that provide the acropores with nutrients. The acropores are therefore dependent on bright locations. Acropores dominate the reefs in many places and form veritable monocultures. They grow very fast and have an estimated 25% reef formation. In Barbados, Acropora cervicornis has seen an annual increase of 26 centimeters. While the flowering animals in the shallow water and on the reef roofs usually grow bushy or antler-shaped, they often form table-shaped sticks on the reef slopes and grow horizontally to the outside in order to catch as much light as possible. 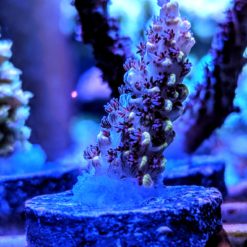